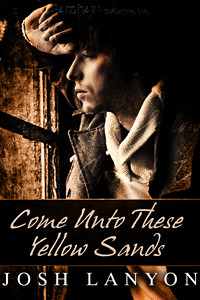 I've been slow getting over here to announce it, but Come Unto These Yellow Sands is now out and about at all the usual places.

Here's a bit of a blurb and a snippet to lure you, in case you need to be lured.

Sometimes the adventure chooses you.

Lover of fine poetry and lousy choose-your-own-adventure novels, Professor Sebastian Swift was once the bad-boy darling of the literati. The only lines he does these days are Browning, Frost and Cummings. Even his relationship with the hot, handsome Wolfe Neck Police Chief Max Prescott is healthy.

When one of his most talented students comes to him bruised and begging for help, Swift hands over the keys to his Orson Island cabin—only to find out that the boy’s father is dead and the police are suspicious. In an instant, the stable life Swift has built for himself hangs on finding the boy and convincing him to give himself up before Max figures out Swift’s involvement in the case.

Max enjoys splitting an infinitive or two with his favorite nutty professor, but he’s not much for sonnets or Shakespeare. He likes being lied to even less. Yet his instincts—and his heart—tell him his lover is being played. Max can forgive lies and deception, but a dangerous enemy may not stop until Swift is heading up his own dead poet’s society.

Warning: The Surgeon General has determined that Josh Lanyon’s smart, sexy, sophisticated stories may prove hazardous to your heart.

EXCERPT
Swift drove down the shady wide streets, past the little shops and art galleries and comfortable homes to the small brick police station surrounded by tidy green lawns and a forest of wet flagpoles.

Inside the station it was warm and surprisingly quiet. Hannah Maltz, the dispatcher, was working at her computer, clicking briskly away at the keyboard. She was a very pretty middle-aged woman—far too pretty to be an effective cop, in Max’s opinion. Max had a tendency to make those kinds of judgment calls. What Hannah thought about being regulated to desk duty was anyone’s guess, but she was a great dispatcher. She had a very nice voice in an emergency. Not that Swift had many emergencies these days.

“Why hello, Professor Swift,” Hannah greeted him. “Wet enough for you?”

Swift was unsure what official explanation of their friendship—if any—Max offered inquiring minds. Having grown up in the spotlight, Swift was basically blind to public curiosity. He took it for granted that people paid attention to what he did, and he’d stopped noticing his own celebrity a long time ago. After three much publicized stints in rehab you tended to develop a thick skin. But Max was the police chief of a small town, and it went without saying—or at least they had never got around to discussing it—that he required discretion.

He was not much good at jokey back-and-forth stuff, but Swift said gravely, “Are you checking out my gills again?”

Hannah laughed. “Chief Prescott’s on the phone, but you can go on through.”

The door to Max’s office stood open. Swift could see a sliver of Max tilted back in his chair, phone to his ear. He heard snatches of Max’s deep tones between the click-clacks of Hannah’s keyboard.

Max glanced up as Swift pushed open the door. His brows rose in surprised inquiry, and he nodded to the chair in front of his desk.

“You can bitch about First Amendment rights all you want, Harry, but I’m telling you if you print that, we’re going to have words.”

Swift sat in one of the chairs before Max’s orderly desk and looked idly about the small office with its battered file cabinets, wooden coat rack, bulletin boards and bookcase with leather-bound volumes that were older than Max.

Whatever Harry said on the other end of the line amused Max. He gave that deep, growly laugh that always sent a pleasurable shiver down Swift’s spine. He wished Max would hurry up and get off the line. He hoped the phone call never ended.

The first time Swift had been to this office was six years ago, not long after he’d moved to Stone Coast. He’d woken one morning to find someone had plowed into his parked car during the night. He reported the hit and run and spent a couple of minutes talking to the then newly elected Chief of Police. The only thing he really recalled of that first meeting was that he’d immediately liked Max’s air of quiet, easy competency. It hadn’t occurred to him that Max was gay. Sex, let alone romance, had been the last thing on his mind in those early brittle days of his recovery.

That was another thing Swift remembered from that very first meeting. Max’s unexpected charm. You didn’t look for charm from a cop. Swift didn’t, anyway. But Max had it in spades. It didn’t hide the tough competency, just made it a little more palatable, like the spoonful of sugar that helped the medicine go down. As now. Harry—most likely Harry Wilson, editor of the Stone Coast Signal—was having the law laid down in the nicest possible way. And as pissed off as he undoubtedly was, he’d probably vote Max into office for a second term when Max came up for reelection in two years.

Hannah came in and left a sheaf of papers in the tray on Max’s desk. “I’m taking off,” she whispered to Max.

He raised a hand in absent acknowledgment. “Yeah, yeah,” he said good-humoredly into the mouthpiece. “Same to you, my friend.” He stood his pen on its nose, absently balancing it for a second, then catching it before it fell. “Sure, give me a call. Maybe sometime next week.”

Swift smoothed his suddenly damp hands on his jean-clad thighs. The moment of truth. He wasn’t ready for it.

After all, no one need know what he’d done. Even when Tad was caught, he might not say Swift had given him keys to the cabin. It might never come out at all.

But no. No. Swift no longer permitted himself to run from the difficult things.

Max hung up and smiled across his desk at Swift. His eyes were the warm color of good whisky. “Your timing is perfect. I’ve just got time to grab some supper before I have to meet the coroner.” He rose, six foot four of lean muscle, and reached for his leather jacket hanging from the coat rack.

Swift stayed seated. “Max, I have to talk to you.”

“Something we can’t talk over while we eat?”

His heart was hammering with something weirdly close to panic. Swift made himself go on, made himself speak calmly. “I neglected to tell you last night that I’d seen Tad Corelli earlier. In the afternoon. After my classes were finished. In fact, I loaned him the keys to my place on Orson Island.”

Max didn’t move a muscle. He didn’t even blink. He was so still, Swift wondered if he’d heard.

He opened his mouth to ask, but Max finally said in a voice stripped of any emotion, “You didn’t think that was something you ought to mention?”

“Yes. But…I wanted to talk to him first. I wanted to convince him to give himself up.” Swift watched Max reach for the phone. “He’s not there now.”

“And you know that how?”

“I went out there this afternoon. There’s no sign that Tad ever arrived at the bungalow.”

“You… Jesus F. Christ.” Max let the handset drop back in its cradle. He stared at Swift. “Are you crazy?”

Swift shook his head, though the question was probably rhetorical.

“You knowingly, deliberately let a murder suspect…” Max’s voice died out as though his thought process had short-circuited. He continued to gaze at Swift in almost stricken disbelief.

“I didn’t know he was a suspect when I offered him the use of the bungalow.”

“You sure as hell knew after I told you last night.”

“Maybe? Maybe? Do you have any clue of what you’ve done?”

Unwisely, Swift protested, “Even if Tad did this, it’s not like he’s Public Enemy No.1. He’s a confused, scared—”

“Don’t.” It was enough to shut Swift up. Max’s face was white, his eyes blazing with fury. He looked like a stranger. A stranger Swift would not want to get on the wrong side of.

“Not one word more, Swift.”

But there was always room for one word more, right? Especially this word. Besides, Swift had always been so very bad at following rules.

Max stared at him as though Swift had been hand delivered by Martians. As though Swift were an alien creature that Max needed to exterminate—as soon as he figured out whether to use bullets or pesticide.

“Yeah?” Max made a funny sound that wasn’t quite a laugh. “Not as sorry as you’re going to be.”

The hair rose on the back of his neck. Swift searched the hard, implacable planes of Max’s features. Max wasn’t a guy for idle threats. “Are you…? Am I…?” He wasn’t even sure what question to ask. He knew that expression although Max had never worn it before—not for Swift. It was the expression that said, You’re pathetic. You’re a junky low-life loser. You can’t be trusted. You aren’t one of us. You don’t belong here.

It was an expression he’d have done anything to keep from seeing on Max’s face.

Swift steadied his voice and got out, “Am I…under arrest?” He tried to say it without emotion, but he had at long last reached a point in his life where he had something to lose. A number of things, in fact, that he didn’t want to lose. Wasn’t sure he could survive losing. Arrest meant losing them all.

Max didn’t seem to hear the question. He was on his feet again, moving into action, speaking under his breath as he grabbed the phone. Tight, fierce words. “Stupid, arrogant, irresponsible, crackbrained…” He jabbed a couple of buttons and then paused. Fastening that lightless gaze on Swift’s face, he said, “Get out of my office. Get out before I do something we’ll both regret.”

Swift was up and to the door when Max threw after him, “You realize this is probably going to cost you your job?”

Swift had no answer. Or maybe the answer was in his face. Max turned his back on him and snapped his orders into the phone.