Not what you think.

We're having internet connection problems. No, not exactly. Thanks to a massive, rolling update by the swell folks at ATT, we're having network problems. The words Network Problems should be in shaky letters like you'd find in an episode of Scooby Doo.  So to make a long story short, our home network is fried. We've fallen and we can't get up.

And the first person who giggles and says can't get it up, I'm going to reach through this computer monitor and smack. It ain't funny.

And how unfunny it is, becomes more clear with every day -- we're going on for day three now. I used to be such an even-tempered, mild-mannered...

Enywho, the fiend from hell that currently inhabits my body suggested  I do some quick promo for this book I have coming out next week on the 22nd, since I might not get another opportunity. 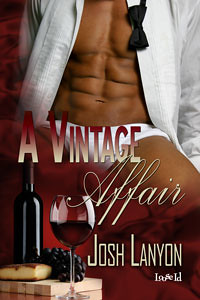 So here's a blurb and an excerpt to A Vintage Affair. It's a contemporary romance with mysterious elements. I'd say it's criminally funny, but...I have no sense of humor at the moment and I believe criminally funny has been already used.

Message in a bottle.

Somewhere in the cobwebbed cellar of the decrepit antebellum mansion known as Ballineen are the legendary Lee bottles -- and Austin Gillespie is there to find them. The last thing on his mind is hot and heavy romance with handsome bad boy Jeff Brady. But Jeff has other ideas and, after one intoxicating night, so does Austin.

The only problem is they have different ideas. Jeff doesn’t believe in love at first sight, and even if he did, he’s buried more deeply in the closet than those famous missing bottles of vintage Madeira. Popping a cork or two is one thing. Popping the question? No way. No how.

Unless Austin is ready to give up on another dream, he’s going to have to figure out how to make sure the lights go on -- and stay on -- in Georgia.

Fifteen minutes later he was in a large room on the second floor holding a stack of much laundered towels and an extra wool blanket to “help keep the drafts out.”

The room had old-fashioned green and blue wallpaper. Two of the windows were missing blinds. There was a rummage sale’s worth of broken antiques including a shaving stand with a cracked mirror and a small butter churn. Whatever the heck the Cashels did with butter in the bedroom, he did not want to know.

The lock on the bedroom door was broken.

Austin sat on the edge of the bed -- sinking about a foot into the swamp of a mattress -- and checked his phone messages.

In addition to Ernest’s earlier message, there were four messages from the direct house line in Frederick. It was hard to believe Harrison would be calling. For one thing he didn’t believe in apologizing, and for another, he would not believe himself in the wrong. Austin pressed to retrieve the messages and got a low battery warning. And his phone charger was in the rental car.

The windows rattled in a blast of wet wind.

Whatever Ernest or whoever was calling him wanted, it was just going to have to wait till morning.

He put his phone away and spread the extra wool blanket over the bed. He hoped the sheets had been washed in the last decade. He hoped he would not be sharing a bunk with spiders.

There was a tap on the bedroom door.

Jeff stood in the hallway. His face was grim.

Austin stepped back and Jeff entered, closing the door behind him. “I know there are things worth fighting for.” He kept his voice down, but he was angry all the same. “You don’t have the right to stand in judgment.”

“Fine. Agreed. I don’t have the right.” Austin reached for the door handle. “Was that it?”

Jeff’s eyes were dark with emotion. “What is the matter with you?”

“You know what the matter is with me.”

“Naw.” Jeff tried to take him into his arms. “Don’t do this. It doesn’t have to be like this.”

A muscle jerked in Jeff’s jaw. “You’re asking for something I can’t give you.”

“Yes, you goddamned well are.”

“Jeff, what do you want me to say? I understand it was just sex for you, and I’m not asking for anything -- except that you leave me alone so I can get over it.”

“Get over it,” Jeff repeated in amazement. “What are you getting over? You can’t seriously think you’re --”

“Jeff. Will you please leave me a little dignity here? Go away.”

“Austin.” Jeff looked stricken. He pulled Austin closer and Austin remembered that first shared hug in his hotel room. The comfort of simply being held, of being genuinely cared for. But that was an illusion. Even if Jeff did care for him on some level, no way was he going to acknowledge let alone act on those feelings. He had made that just as clear as he could.

Jeff was talking, his voice rough and uneven. “I don’t mean to hurt you, sweetheart. I didn’t want this.”

Sweetheart. Well, at least it was an improvement over the honeys they all bestowed indiscriminately on each other. Jeff’s lips brushed his temple. So gentle. Almost cherishingly. Austin closed his eyes. Who was he kidding? Of course he wanted this. Want blazed through his bloodstream like a high fever, something that would either run its course and leave him wrung out and empty but once more cool and sane -- or kill him. Either way, there wasn’t any denying how urgently he wanted Jeff.

“Did you ever hear of knocking?” Jeff blustered.

“Would you both go away?” Austin requested wearily. “It’s been a really long day.”

“You heard him,” Cormac said imperiously.

Jeff shook his head, clearly longing to pop Cormac, but in the end he settled for shooting Austin a long unreadable look before walking out.